The winning entries from our second competition are below. Scroll down to view judges’ comments. To read the winning poems check out our anthologies page.

*Disclaimer: It should be mentioned that some of the content of 2008’s second and third placed poems may offend some readers. 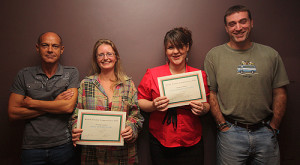 4th   On deck with Alun Lewis, the secret sleeper by Owen Lowery

13th Show me the money by Amanda Weeks 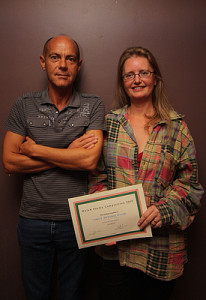 The winning poems will be sent to the Welsh Academi’s Literary Magazine A470 and will hopefully appear on their website too. We have also informed the local and national press.

A wonderful poem with fine lyric qualities and a worthy winner. It cleverly highlights the dilemmas we now face in relation to global warming and the need for sustainable energy – and the fact that the poem focuses on those issues here, Wales, now, today, makes it all the more relevant. As the poem suggests, there are no quick fix, easy answers – if there are any at all – and it is filled with that frustration. The poet cleverly uses the repetition of reported and direct speech, with slight changes, to build and build momentum, urging the reader forwards: “yes wind farm, / no wind farm and don’t wreck a speck of my grass / or the planet will shrink to pea-sized piss”. While the use of line-breaks, one word lines, and excellent imagery (“towers puking clouds up and outwards”) in the middle stanza’s skillfully slow the pace and perception, allowing the reader to pause for breath and reflect. History is here too, as the poet cleverly weaves the past with the present: “And today I walk / St Non’s Bay / – she who cured the eye…” The rhythm quickens again as frustration grows, and form skilfully matches content, until we reach a breathless flourish: “wind farms look like bog brushes – kill our birds, sheep / horses, fish and children”; “with wind farms fizz our brains and bring the psychos out”. No pastoral idyll. No romantic seascape, this. The natural landscape has become a challenger rather than a comforter. A nice “view” has become an environmental, ideological, and aesthetic, conundrum. NIMBY vs. Planet Earth. “I’ll crack my balls before I let them step / an inch towards my precious fossil fuelled, polluted palace on the hill”. Congratulations to Emily Hinshelwood, a poet Highly Commended in last years competition, on producing a topical work of such high quality.

This poem reminds me why, of all the art forms, poetry is perhaps my favourite. No film, painting, or piece of music could really do this – could really adequately convey the mixture of the concrete and abstract, interior and exterior, of yesterday and today. Pollyfiller, is poetic form teetering on a precipice. Language stretched to the limit. The shifting syntax reveals, and brings into consequence, the various orders of experience, allowing each to arise from and transform what came before it. In this manner no position remains static or gains ascendancy and none controls the direction of what follows. Life: “A pinioned point held between then and tomorrow”; flickering on walls; “in a paint peeling doorway”; “under dad’s bed”; “down the local”. The poem is dark, dangerous, gritty, and unpredictable. An open sore. A wound. A “knife point sharpened on a lonely stone”. It affects the reader on a physical level, making them uncomfortable – and that’s always a good thing. “A glass submarine though, cracked with too much depth, / washed up in a cell, padded with some shit crust on the wall. / All technicolour dream coat and no knickers,…”. In a world of samey-sameness, and poor imitations of the past, this is a fresh, original, and truly inspirational piece of work. So, Polyfiller, then. Like last year’s winning entry, another poem which may upset the Arts Council and our self-appointed poetry elite. Thank fuck for good art, then. Thank fuck for Clare Ferguson-Walker. Vive la resistance.

I don’t do hugs, by E J Williams

Excellent poem. Excellent title. “I don’t do hugs”. Very, now. Today. A love poem for the disaffected, disconnected, SMS messaging, Wii exercising, iPod generation. Lust over love. Fetishism over flowers. “You suck your fingers in readiness / though some holes can never be filled”. The poem is very skillfully laid out on the page, with very well thought out use of line breaks. Each word hangs in the air for a moment. Each line abrupt, a slap in the face. “Twat. / Dry. / Uncooperative. / The body shuns the head.” Every word used in this poem was given an impressive amount of consideration. Every punctuation mark, every line break, every time the poet has chosen to use a new stanza… counts. The staccato rhythm of the piece, forces the reader to pause, forces them to consider, forces them to contemplate, and draws them in physically, and emotionally, to the dark and unsettling side of human relations today. “Naughty girl. / Half heartedly. Embarrassment hangs on the air.” The poet ‘s use of imagery is also very well crafted and executed. Again, not a single word wasted. No unnecessary adjectives.
”Mouth stretching to odd angles. / Wept oceans for your smile.” The poem drags the reader along, through this world of “How to be Dirty…”, until they reach it’s moving and powerful conclusion: “Bruise around my nipple. / Proof that I belong. / Human detritus. / Ravaged / in a sea of sweat and spunk.” A great poem in a world of bland, meaningless, versification, and another top three entry from the talented, Eloise Williams. 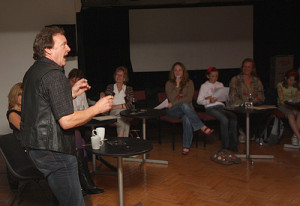