Welsh writer, poet and environmentalist John Evans will be judging our 2022 competition. 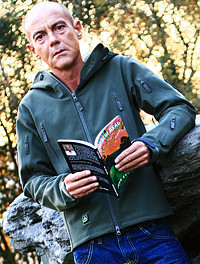 John Evans is one of Wales’ most uncompromising and original contemporary artists and writers. He began his career as a frontman and songwriter for Wales’ first punk rock band. He later went solo and signed as a singer/songwriter to the Situation 2 arm of Beggars Banquet Records. His single Sister Soul was released in 1981.

He has worked as a full-time writer, film maker and lecturer for Cardiff University and Literature Wales. He has been described as ‘the leading figure in the New Wave of Welsh writing’. He is also well known for campaigning with ‘Save The Badger’ alongside Queen legend Brian May.

John Evans work has often been described as ‘impossible to categorise’, breaking the boundaries and challenging the conventions of traditional forms.

The interest and acclaim for his work has spread quickly. Best-selling author Iain Sinclair describes him as ‘a hot and necessary item in an evidently grim landscape’, while others see him as ‘the authentic voice of the street – the death rattle of post-industrial Britain’. His work has been compared to writers like Kathy Acker, William Burroughs, Henry Rollins, and Irvine Welsh; and bands like Pere Ubu and Joy Division.

John has had a number of books published, including The Acid Real, Giants, G.B.H., Industria, How Real Is My Valley?, The Red Kite in Wales, and has been editor of a number of books and magazines including, Black Harvest, Out of the Coalhouse, Mogg Williams – Selected Works, and Kulture Vulture.

His latest book, Goshawk, is a collection of poetry on the life and habitat of the Goshawk, with illustrations by Marita Forss. Inspired by the landscape of south Wales and the many years of making films of these wonderful birds.

He is seen as a tough and controversial figure, either for his outspoken views on the arts council in Wales, for campaigns on social, cultural and environmental issues or for the confrontational nature of his work. During 2003, a poll to find the ‘greatest Welsh men and women of all time’ placed John Evans at 27 amongst the 100 names on the list, joining the likes of Dylan Thomas, Anthony Hopkins, and Catherine Zeta Jones.

And in 2011, when Swiss airline company Helvetic Airways were looking for artists to represent the various European countries on their flight route they chose John to be the ‘public face’ of Wales. They also asked him to write a guide book to Wales which is given to all passengers visiting the country and his text appeared alonside images by Magnum photographer, David Hurn.

Note: Unlike some competitions where the judge never gets to see your hard work our judges read every poem submitted. We do NOT use any filter judges.

The poems will be judged anonymously to ensure a fair competition and unbiased result and winners will be announced on our website here as well as in the local and national press.